Important Appeal from God The Father to All!

Messages to Anne in Mellatz/Goettingen, Germany

Feast of Christ the King 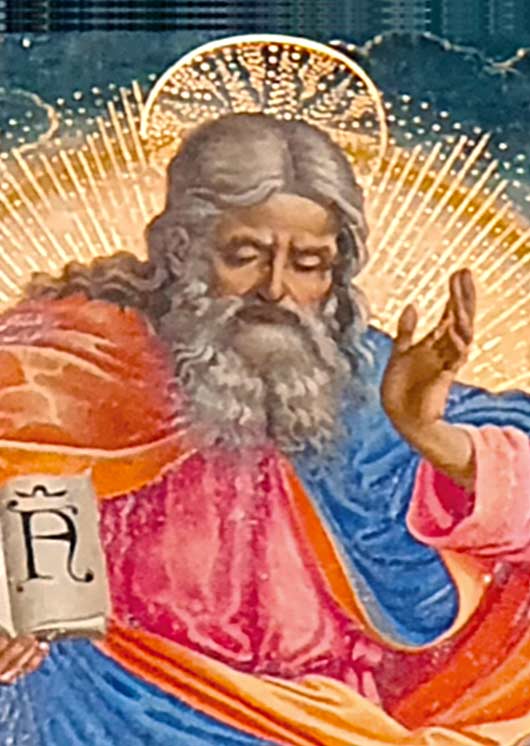 October 30, 2016 - Sunday, Feast of Christ the King. The Heavenly Father, after the Holy Tridentine Sacrifice Mass according to Pius V, speaks through His willing, obedient and humble instrument and daughter Anne.

In the name of the Father, the Son and the Holy Spirit. Amen.

Today, October 30, 2016, we celebrated the Feast of Christ the King. It was preceded by a dignified Holy Sacrifice Mass in the Tridentine Rite according to Pius V. The altar of sacrifice as well as the altar of Mary were bathed in glistening light and decorated with beautiful floral and candle decorations. The angels entered and left. They sang the "Gloria in excelsis Deo". Quite a solemn atmosphere was created. I felt that Christ, the King of the whole world was present in My heart.

The Heavenly Father will speak:

I, the Heavenly Father, speak today, on the Feast of My Son, the Feast of Christ the King, through My willing, obedient and humble instrument and daughter Anne, who is completely in My will and repeats only words that come from Me.

Beloved little multitude, beloved followship and beloved pilgrims and believers from near and far. I, the Heavenly Father, give you today significant directives for the future, so that your life may be lived more intensely in the spirit of Jesus Christ, My Son.

You must testify to your Catholic and True Faith, because My Son's Church is completely devastated and is still being trampled upon.

My beloved ones are rejected, yes, they are persecuted. The persecution of Christians is in full swing. But pay attention that My Son Jesus Christ will protect you.

No, My beloved ones, now you have reached the crossroads. Now the division of faith has occurred, you must recognize this and also pass it on. You cannot be condemned to silence by defacing the true Church of My Son. My Son Jesus Christ went to the cross for all, and not only for those who believe and trust, but also for those who are in error and persist.

He wants to lead all His creatures to true faith and press them to His divine heart. Unfortunately, these priests do not listen to the words of My Son, who looks upon them full of longing. He wants to flow through their hearts and yet they deny Him. Even today they throw dirt at him and remain in the greatest mire. In this modernist church, error and unbelief have entered, namely Satan himself. The devil rages in these churches and many believers go to the left side, the side of eternal corruption. They do not testify to the truth even today and remain silent.

You, My beloved ones, must respect and worship Me in My Son and in the Holy Spirit, and testify to Me, even if it should cost your life.

I, the Heavenly Father, have gone before you in My Son. I sent Him into the world to redeem you all. Do you not see My great pain? I sent My Only Son, the Son of God, into the world to redeem you. He, who was innocent, endured the greatest suffering and was obedient until the cross. He instituted the Holy Eucharist for you as a testament, as the last and greatest legacy. Why do you not show your gratitude and fall on your knees in reverence? Why do you stumble and float with the general current? Do you not realize that My Son Jesus Christ went to the cross for you? Was His love not great enough? Did He not give everything for you? Were My Son's sacrifices in vain? Did He really suffer in vain and endure the greatest torments? Do you not finally wake up? The last drop of blood has flowed for you, even for those who do not believe.

You, My beloved father children, believe that I, the Heavenly Father, must intervene. This event, inexplicable to you, is before your eyes. It will be cruel and powerful and will inevitably come upon you.

But you, My children, who believe, you are protected. You have shown obedience to Me at all times. You would also testify it with your last drop of blood. I have received this assurance from you. You love Me, the Triune Father in Heaven. You have proven this many times. For this I thank you today, on the feast of My Son, the feast of Christ the King.

It is He who loves you immeasurably. Your dearest Mother, stand at My throne for the erring and for the unbelieving.

There is only one truth and that is the truth of the One Catholic Faith. There will never be any other faith than this. Everything else is the machination of man. The Revelation of St. John tells you the full truth, which is irrefutable.

Look into the Bible, My beloved ones. There you will recognize the truth. But, unfortunately, My beloved priest sons do not testify to this truth. They say, "But we have the Bible, we do not need prophecies, because they are fantasies, you do not have to believe in them." Do you really know the Bible? Then prove Me wrong in My messages.

Or are you lying in untruth? Then you should turn back. There is still time.

I am the way, the truth and the life. Whoever believes in Me will live. But he who does not believe will be condemned.

So it is written in the Bible, which you really do not know. That is why I am sending the prophets to you today. But you try to ruin them mentally and murder them because you persecute and despise them. Do you think this will go unpunished? But My punishment is coupled with love. I have chosen you, My priest sons, but you do not show obedience to Me.

I still love you and want to reclaim your souls. That is why I have appointed many prophets and seers for you, so that you may realize that I truly love you. Turn back, for unbelief has taken possession of your hearts. The faith within you must grow in depth. I continue to long for your hearts.

Today, on the Feast of Christ the King, you consecrated yourselves to the Heart of My Son Jesus Christ, in the "Consecration of the Human Race to the Sacred Heart of Jesus." I thank you for having followed the love of My Son. This consecration is so important because otherwise many people will be lost forever, in eternal damnation. You cannot understand and fathom this because your human mind is not sufficient.

My believers, your faith has not grown in depth, it is only on the surface. I desire that your faith become deep like the sea and that you live and witness My Son in the Trinity.

The Holy Sacrificial Eucharist must again be put first among you and never this meal communion. The meal table and the people's meal are so important to you today. The people's meal means you serve the people and not My Son Jesus Christ in the Trinity. You turn away from Me and abandon Me on this bitter path. You are once again crucifying My Son.

You, My beloved priest sons, wake up, because the intervention of your Heavenly Father is close at hand. Then it will be too late for all of you.

If you will not repent and recognize, I am the Mighty, the All-Powerful and Triune Father in Heaven. In Him you must believe and to Him you must bear witness.

I love and bless you in the Trinity with all the angels and your dearest Heavenly Mother. In the name of the Father, the Son and the Holy Spirit. Amen.

Live love and be obedient to your Heavenly Father in the Trinity.